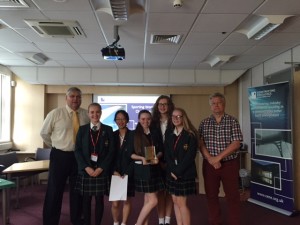 The winner of this year’s Sporting Wonder Challenge, a project designed to give students in the North East an insight into the construction industry, has been revealed.

The teams, from various schools across the North East, were asked to create a construction company, coming up with a name, logo and brand. The companies were then asked to place a bid for a development which would host one or more sporting facilities, which could then be used by the local community. The development had to be functional and environmentally friendly, sympathetic to its surroundings and provide added value to the community.

This year’s winners came from Durham High School for Girls and their construction ‘company’ BASE – Foundation for the Future and their bid for a two-storey steel framed sports centre with sustainability running on all levels, including ground heat source pumps and green roofs.

The team suggested the centre would be located in Crook on a brownfield site owned by the local council. The team had thoroughly researched costs and location, with detailed site research and local interviews indicating how the community felt they could develop with the proposal.

The standard at the annual competition, organised by Construction Industry Council (CIC), Northern Counties Builders Federation (NCBF) and supported by Constructing Excellence North East (CENE), was so high that the appropriate local authority as they believed they all merited further investigation.

Chief Executive of CENE, Catriona Lingwood, said: “I love working on any task which has the ability to inspire and inform young people on the construction industry.

“The challenge has given them a real insight into the industry and I hope that many of them consider it as a future career option as it would be an honour to have such talented people in the industry.”

The Sporting Wonder Challenge was originally created to give young people a hands-on experience of the industry, looking at every stage of a construction project from producing a 3D computer-aided design (CAD) model to the costing of the project.

The challenge took place from February to June and required the teams to submit two tasks, which were then judged by a team of industry experts.

The judging panel was made up of Chief Executive of CENE, Catriona Lingwood, Regional Chair of CIC[A1] , John Nielsen, Angela Carney of Association for Project Safety and representing NCBF, Douglas Kell.

Regional Chair of CIC, John Nielsen said: “The winning team showed great creativity and understanding of their market and brand.

“The bids all showed a real understanding of the industry, which is great to see from such young people, we were all extremely impressed with the ideas presented to us.”

The grand final held on 6 July saw the winners being awarded with a cash prize and trophy.

The students were supported by industry consultants who offered help and advice throughout the process.

Some of the competing schools were able to build delivery into lessons, which worked well for students studying GCSE or BTEC in Construction and the Built Environment, with other students working on the project during lunch breaks and after school.