By Catriona Lingwood, Chief Executive of Constructing Excellence in the North East

At the weekend around 20,000 people marched through Newcastle to celebrate inclusivity and diversity. Constructing Excellence in the North East joined the parade to demonstrate support for the construction industry’s LGBT+ workforce, under the banner of #BuildingEquality, the national LGBT+ Construction Working Group formed in 2015.

We extended the invite to anyone working in the industry, whether they identify as LGBT+ or as an ally, wanting to demonstrate support for LGBT colleagues. We were thrilled to have organisations such as Arup, Atkins, Balfour Beatty, Mott MacDonald and Space Group marching alongside us. LGBT workers exist across all industries and construction is no different. According to research released by Public Health England in 2017, around 2.5% of the UK population openly identify as lesbian, gay, bisexual, transgender or other, meaning there could be at least 50,000 LGBT+ people working in the industry.

2018 marks a symbolic year for the LGBT+ community, it has been 30 years since Section 28 was introduced, banning local authorities from promoting homosexuality and 15 years since it was (thankfully) repealed across the UK. It’s also the 40th anniversary of the Rainbow Flag and I think marching in support of the LGBT+ community alongside people of all ages, genders, ethnicity and values was the perfect way to celebrate that.

Earlier in the month, industry representatives from over 23 construction companies also marched in London Pride alongside a rainbow JCB, which I think is brilliant and shows exactly how the industry has progressed over the years. The industry is no longer the ‘stereotypical’ dirty, dangerous construction site full of white, heterosexual, ‘tough’ men. We’ve come on leaps and bounds with understanding the positive benefits of a diverse workforce and support 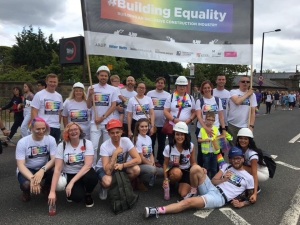 Construction News conducted a survey of 1,045 people in the construction industry and found that over half (56%) of LGBT+ respondents still aren’t comfortable being open about their sexuality or gender, and a third (28%) have had an offensive or inappropriate comment made about their gender or sexuality in the workplace over the past year. So, although we have come a long way, there is still much work to be done to ensure the industry is a truly diverse and inclusive workplace for its LGBT+ employees, which is why the work of #BuildingEquality and its members is so important.

In 2010 the Equality Act became law in the UK, making it illegal to discriminate against lesbian, gay, bisexual and transgender people in the workplace. To be anywhere near reaching the targets set by Construction 2025, we need to be encouraging the entire talent pool and not excluding potential candidates, for any reason. We need diversity in gender, age, ethnicity, values, experience and behaviours. Given the support the industry has shown towards LGTB+ workers, both during Pride and every other day, there is an incredibly positive attitude across the industry towards getting exactly what we need – inclusive workplaces supporting a diverse workforce.

For more information on Constructing Excellence in the North East, please contact chief executive, Catriona Lingwood, on 0191 500 7880 or email catriona@cene.org.uk.